Headcorn Airfield has had an active Display Team for 39 years. The team is made up of experienced jumpers and staff, who are qualified to carry out displays and ready to drop into events throughout Kent and occasionally further afield.

The Headcorn Display team is governed by the British Parachute Association, who set out the skills and experience required in order to be part of a parachute display team in the UK (see BPA Operations manual: Section 13 Display Parachuting).

Although the team makes these jumps look easy, each team member has successfully completed a rigorous training programme at the beginning of the season before being signed off to take part in live displays.

Our Display Team has entertained crowds at many special events, from air shows and sporting events to school fetes and weddings.

Skydive Headcorn can carry out parachute displays at any location provided it is safe to do so and so long as the regulations set out by the British Parachute Association are met. (See BPA Operations Manual: Section 13 Display Parachuting)

The cost of a display varies, it is determined by factors such as where the event is located, how many parachutists are required and whether you require them to jump with smoke (streamers are included free of charge).

We are happy to answer any questions you may have, or to discuss your booking requirements. As each display requires considerable organisation prior to the event, we advise you to contact us at least THREE months before your planned event.

The team arrives onboard our display aircraft, a Britten Norman Islander. At around 2,000 ft the Jump Master drops a ‘wind drift indicator’ from the aircraft to check the strength and direction of the wind. Having got the crowd’s attention, the aircraft climbs to between 1,500 ft and 5,500 ft. Once at the appropriate altitude the team begins to exit the aircraft, one-by-one or in groups. The crowd watches as they freefall for about 10 seconds; a breathtaking sight, which can be enhanced by trails of coloured smoke.

Once under canopy the parachutists deploy their streamers ready for a spectacular display of skill and judgment. They work with the wind conditions, using their skill to fly highly manoeuvrable ram-air type canopies as part of a ‘stack,’ and then spiral down to land on a target set out in the arena.

Once safely on the ground the team turn their attention to packing ready to go and do it all again! Now the spectators have a chance to observe packing techniques, talk to the team, ask questions and sometimes to help.

She has over 8900 jumps and has led the team since 1982.  In the eighties she was the British Ladies Champion three times and has represented the country at three world parachuting championships and two world cups.  She has made over 700 display jumps all over the country.

Her full time job is as Manager of Skydive Headcorn and she is a British Parachute Association Advanced instructor/Examiner and also an Accelerated Freefall Instructor.

As a hobby she also flies the Club's Islander and Cessna Caravan.

Pete is the chief instructor of Skydive Headcorn and a veteran of over 8500 skydives.  He is an Advanced Instructor/Examiner, Accelerated Freefall and Tandem instructor.  He is also a master rigger and maintains and repairs all the clubs equipment.  He has represented the country in seven world championships in accuracy. He also has a degree in Psychology which he was awarded from the Open University a few years back.

Janos is Hungarian but has lived in this country for over 20 years and now has British Nationality.  He is a veteran of over 4000 jumps and has represented the country at four world championships in Accuracy.  He works full time at Skydive Headcorn as a tandem instructor.

Simon who has over 1200 jumps.  He is a Tandem and Category System instructor, an advanced packer and rigger and occasionally mans the phone!  He also coaches Canopy Formation jumps.

Esther has in excess of 3,000 jumps and has represented the country on many occasions over the last 30 years.  Her discipline is accuracy landings and she has been the ladies National champion over 12 times.  She has an HGV licence and regularly drives her truck on the continent and she is also a qualified nurse. 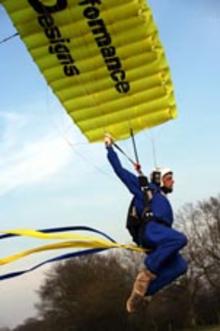 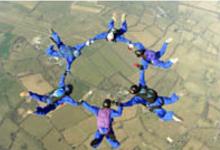 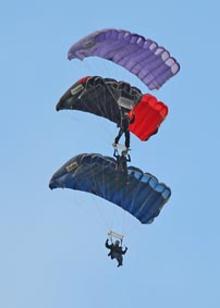